The webpage sciencecentre-pilke.fi uses cookies for statistical purposes (for instance to collect data on the number of visitors) and for some functionalities of the service. The web service includes some embedded views from third-party web services which may install cookies on your browser. 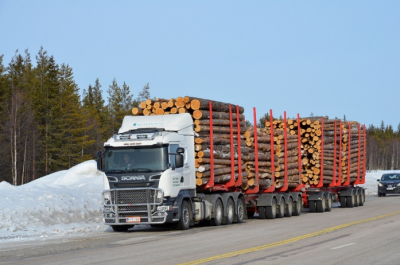 Metsähallitus has participated in testing using various high payload capacity trucks and trains. In road transport, these are referred to as High Capacity Transport (HCT) trials, whereas the trains are known as Longer and Heavier Trains (LHT). The purpose of these trial projects is to seek more cost-effective and eco-efficient solutions for transporting wood, without sacrificing safety.

The results from the trial have been positive and the intention is to extend and expand the trial. The new Small Giant, which is the first 10-axle vehicle combination in Europe equipped with a CTI system (Central Tyre Inflation), began transporting wood in the autumn of 2019. The vehicle combination will operate at a combined weight of 76 tonnes, until it receives a license for a combined mass of 84 tonnes.

The Lapland region. A truck demonstration can be arranged in conjunction with a visit to a logging site.

Traveling with a Giant – 104-tonne Giant