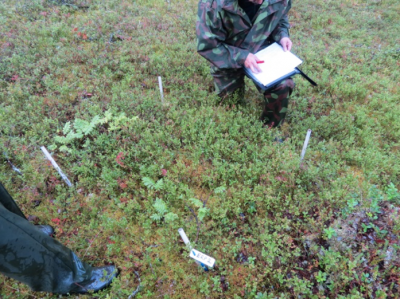 The old-growth Norway spruce wood on top of the Hyypiökivalo hill represents a typical hilltop forest of the region. The area is located high above the sea level, and the supra-aquatic soil consists of relatively fine moraine. Norway spruce is the dominant species of wood in the area, and birch that occurs as a secondary species is nearing the end of its succession. The humus layer of the soil is quite thick, and spruce primarily regenerates slowly in the natural gaps created by dead trees, snow burden, or storms.

This type of forest grows slowly. Taking the dead trees into account, the growth may not significantly exceed the natural loss. Under natural conditions, the Norway spruce would be regenerated over time by a forest fire destroying the spruce stock, which would be followed by the growth of a significant number of birch trees, primarily birches, denoting silver birch and pubescent birch. A new, more fast-growing generation of spruce would regenerate below the birch wood and take over the forest within 100–300 years.

The hilltop spruce copse is partially located on the western slope of Hyypiökivalo, which provides warmth to the site. Due to the steepness of the hill, light is able to penetrate the ground layer well. The sturdy trees also protect the field and ground layer vegetation from extreme weather conditions, and thus the conditions of the ground layer are well-suited for bilberry production.

Despite the slow growth and relatively slow forest regeneration, this type of forest is environmentally valuable: both dead and living sturdy trees support various species of insects, mushrooms, mosses, and lichens. In addition, layered old-growth trees are favourable to arboreal epiphytic lichens growing on the trunks and branches of trees that are an important source of food for reindeer in the wintertime. Arboreal lichens fall to the ground due to snow burden on tree branches. These types of sparse woods consisting of sturdy trees are also excellent environments for tourism and recreation use, as well as for picking berries. Most years, a spruce copse is an excellent place to pick bilberries due to its extensive coverage and the conditions that are favourable to pollinators.

The site is also part of a network of sites extending throughout the country, where the development of berry crops is monitored from flowering to ripe berries.

The area is used for monitoring the development of bilberry crops. Five 1-m2 sample plots have been established in the area, which are used annually to count the number of bilberry flowers, unripe berries, and ripe berries. The cluster of sample plots comprises its own observation forest stand, which is part of the national network of observation sites. The network produces annual data on the amount of berry crops as well as the timing of flowering and ripening of the berries. As the picking season progresses, the data is also used to produce annual berry crop forecasts. Similar national networks of observation sites have also been established for lingonberries and cloudberries. The yield of berries has been monitored in Finland since the 1990s.

When the ground is unfrozen.

Suitable hiking equipment. The observation squares are located near the road and are easily accessible.